One of the most popular restaurants in Newport is the Brick Alley Pub, which serves a variety of dishes from “pub style” comfort foods to multicultural cuisine.  From flavorful steaks, to fresh local seafood, to seasonal specials, the Brick Alley menu offers great food in a fun, upbeat atmosphere.  They have been featured in local and national publications such as: The Providence Journal, Ford Times, Travel Holiday and Newport Life Magazine. They have also been featured on the Food Network.  The Brick Alley Pub also has a private dining room for hosting events such as wedding rehearsals, birthday parties or any special event. 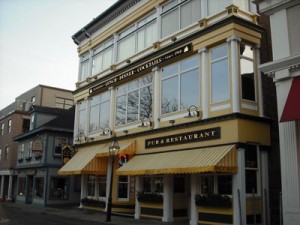 The Brick Alley Pub hosts a variety of special dinners and events throughout the year, supporting local businesses and bringing together community members and visitors alike.

Not only does the Brick Alley Pub serve up great food, they also are big supporters of the local community. Since their opening in 1980, they have supported their neighbors by hosting blood drives, supporting little league teams and their support has grown throughout the years.  In the 1980’s, Ralph Plumb Jr. created a “Keep Newport Clean” initiative and had Brick Alley Pub employees walk up and down Thames Street, sweeping and cleaning the sidewalks.  That initiative has grown and the BAP team helps wherever they can throughout Newport. Since the early 1990’s, the Brick Alley Pub has run The Mary Gomes Memorial Foundation, to help raise money for one of their employees who suffered from Chromes Disease.  This foundation, run by volunteers hosts a golf tournament and raises money to help those who need it.

Posted in: Restaurants and Shopping