The non-profit organization – Newport Restoration Foundation – was founded by Doris Duke in 1968 with the purpose of preserving, interpreting, and maintaining landscape and objects reflecting architectural culture of the 18th and 19th century on Aquidneck Island.  It maintains this mission by being a leader in historic preservation in Newport Country, preserving a collection of the arts of cabinetmaking and art and artifacts from Doris Duke and using these collections for educational purposes.  Since its start, the Newport Restoration Foundation has preserved or restored 83 buildings, and owns 78 historic buildings, most of which are rented as private residences.  This is one of the largest collections of period architecture in the country owned by a single organization.

Besides their commitment to maintaining the historic architecture of the area, the Newport Restoration Foundation also owns and operates three properties that are open to the public as museums.  These include Rough Point – the mansion owned by Doris Duke, the Whitehorne House – which houses a collection of 18th Century Newport furniture, and Prescott Farm – an example of early American architecture and landscape.

The Newport Restoration Foundation also runs a variety of history tours that help visitors learn about different aspects of Newport’s magnificent history. “Discover Colonial Newport,” is a tour that involves revolution and ruin and the struggles for religious liberty in Newport.  “From Golden to Gilded” takes visitors through the transformation of Newport from a colonial age to a gilded summer colony. “Rum and Revolution” discusses the booming rum trade and its activity throughout the Prohibition era.  “Souls & Stones” takes guests to the Common Burying Ground and explores the art of gravestone carving and discusses the diverse group of people buried there.  These are just a few of the great historic tours offered.  All tours leave from the Museum and Shop at the Brick Market Place on Thames Street and last about 75 minutes.

Ann Hutchinson and her followers left Boston and settled on Aquidneck Island in order to gain religious freedom.  After a few years, in 1639, the settlement divided, and a group led by William Codington and Nicholas Easton moved south and formed Newport.  The founders were dedicated to religious freedom, and Newport became one of the first secular democracies in the Atlantic.  Many Quakers and Jews were attracted to this religious freedom and settled on the island.  The town transformed from a small agricultural outpost to one of the five leading seaports in colonial America.

Although there were a variety of religions practiced in Newport, the Quakers became the most influential, dominating political, social and economical life.  Their plain lifestyle was reflected in architecture, landscape and decorative arts.   They were some of the finest craftsman, who made extraordinary furniture. Newport’s architectural heritage can be traced back to the 17th century, when building such as the Old Stone Mill and the White Horse Tavern were built.  Newport’s economics were based on exporting rum, candles, fish, silver and furniture, which fueled their economic growth.  The water front was very busy during this time, and over 150 separate wharves and shops crowded the harbor.  Trade grew, and Newport became an epicenter of modern American capitalism, becoming one of the five leading ports in North America by 1760.  This growth led to a “building boom,” including hundreds of houses and important structures such as the Trinity Church, Colony House, Redwood Library and Brick Market.

The British held Newport from 1776-1779 and hundreds fled.  The British remained until they were driven out by the French, who then stayed until 1783. Due to the damage the British had done to Newport’s economy, Newport had to re-invent itself in the 1900’s.  It transformed into a summer resort area.  Newport became a center for influential writers, artists, educators, scientists, architects and landscape designers during the antebellum period.  Wealthy families such as the Griswolds, Kings and Vanderbilts built mansions in Newport to use as their summer cottages.

Newport maintained its ties to the seas and trading ships filled the water.  Newport started becoming a yachting capital and in the 1930’s, America’s Cup was brought to Newport until 1983.  The Navy also became an important part of Newport and have been based here since the 1860’s.  The Naval War College and Torpedo Station were built after the Civil War and the Navy presence grew.  Today, the Navy is still the largest employer in the area.

After World War II, a preservation movement saved hundreds of structures throughout Newport County.  The Newport Historical Society, Preservation Society of Newport County and the Newport Restoration Foundation were formed, and “Heritage Tourism” became a popular pull for tourists, and helped boost the economy.  Now there are a variety of reasons to visit Newport, whether you’re interested in history, beautiful scenery or an active boating life.

This year, Newport is celebrating its 375th Anniversary.  It will be a year long celebration featuring family activities, lectures, educational programs and public celebrations.  Some activities include: a scavenger hunt, community cookout, community parade, musical tributes, public clambake and a gala at the end of the year. 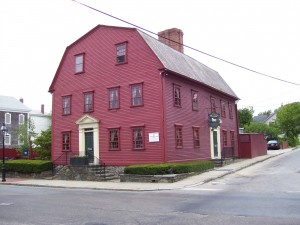