If you like trying local beers and you’re in Newport, the place to visit is the Coastal Extreme Brewing, more commonly known as the Newport Storm Brewery.  Brent, Derek, Mark and Will, four friends who were attending Colby decided that the best thing to do after graduation would be to start a brewery.  The idea began to take shape in 1997 and over the following year and a half, they collected information, wrote plans and approached investors.  They moved into a 2500 square foot garage bay in 1999, bought some used equipment and released their first beer, Hurricane Amber Ale, on July 2nd of that year. 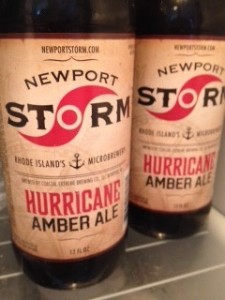 Since that point, the brewery has continued to grow.  They added 1000 square feet in 2002 and in 2006, they started the Newport Distilling Company, which makes Thomas Tew Rum.  The brewery and distillery moved to a brand new facility in 2010, where they’re still currently located, which includes a visitors center and tour deck.  This was also when they upgraded their equipment.  Since their start in 1999, they have made over 30 kinds of beers, including a variety of limited releases.  Their beer is sold throughout Rhode Island, Connecticut and Massachusetts.

These four friends still love what they do, and want to share their products with everyone.  The Newport Storm visitors center is open Wednesday through Monday from 12pm to 5pm, with guided tours leaving daily at 3pm.  While there you can taste the beers they have on tap as well as three stages of their Thomas Tew Rum.  They participate in a variety of events, such as the Great International Spring Beer Festival and the Newport Craft Beer Festival.  They also host tastings at local liquor stores and host pint nights at local restaurants and an Annual Luau at Fort Adams every summer.