October is one of my favorite months in Newport, because while the temperatures are lowering, there’s still so much to do.  Every weekend in October is filled with fairs and festivals of all sorts, celebrating food, fun and the outdoors.  Here’s a list of what’ll be going on around town.

Norman Bird Sanctuary 40th Annual Harvest Fair:  This year’s Harvest Fair will be held on October 4th and 5th right on the grounds of the Norman Bird Sanctuary.  There will be a variety of activities and entertainment such as the Mabel Express Barrel Train, Monkey Bridge, mud pit and midway, pony rides, music, crafters from around New England and plenty of food.  There will also be a variety of competitions to see who has the best single fruit and vegetable, most unusual vegetable, jack-o-lantern, best fresh flower arrangement and more.

International Oktoberfest: This year’s Oktoberfest will take place on October 11th and 12th down at the Newport Yachting Center. It’s known as the waterfronts “official sendoff to summer” and includes the sights, sounds and tastes of Bavaria.  A variety of seasonal beers and German cuisine will be available along with music all day long.  There will be three Biergartens this year and plenty of space to enjoy a nice beer… or six

Bowen’s Wharf Seafood Festival: The seafood festival will be held October 18th and 19th.  This festival honors the “harvest of the sea” and includes a variety of delicious seafood options from many of Newport’s great restaurants.  Seafood such as clam chowder, stuffies, lobster dinners, oysters and more can be enjoyed on the waterfront and will be accompanied by live music both days from 11am until 5pm.

Third Annual Newport Food Truck Festival: From 11am to 4pm on Saturday, October 25th, more than 20 of New England’s best food trucks will be serving up great eats at the Newport Yachting Center.  There will be live music and drinks to accompany the wide array of choices from BBQ to seafood to ice cream sandwiches.

The 22nd annual Bowen’s Wharf Seafood Festival will be held on October 13th and 14th from 11am to 5pm.  In 2005, Coastal Living Magazine named this festival one of the “10 Fabulous Fall Festivals on the Coast,” so don’t miss out on the chance to be a part of the fun.  Admission is free, and there will be live entertainment as well as tons of seafood from various local restaurants and fisherman’s associations.  Enjoy a wide variety of seafood, from lobster dinners, to stuffed quahogs (a RI favorite), to oysters and clams.  Cafe seating will be set up throughout the wharf, so you’ll have a place to enjoy both the food and the entertainment. 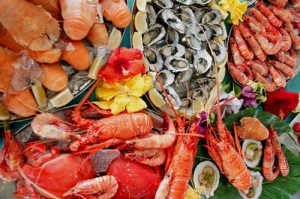