The Hunter House, located in the Point District of Newport, is a great example of Georgian Colonial architecture from the mid-18th century.  This house was built during a time when religious tolerance attracted Quakers, Congregationalists, Jews and Baptists to the area.  The north half of the house was built between 1748 and 1754 by a prosperous merchant, Jonathan Nichols, Jr.  After his death, another deputy governor, Colonel Joseph Wanton, Jr. bought the property.  He added a south wing and second chimney to the house, which transformed it into a formal Georgian mansion, complete with a large central hall.

When Colonel Wanton fled Newport for his Loyalist sympathies during the American Revolution, his house was used as a headquarters for the French during their occupation of Newport is 1780.  After the war, William Hunter, a U.S. Senator acquired the house.  He sold the house in the mid 1860’s and it was passed through a variety of owners until the mid 1940’s, when a small group of concerned citizens purchased the house with the intention of preservation.  This group, led by Mrs. George Henry Warren formed the Preservation Society of Newport County and restored the Hunter House to the era of Colonel Wanton.

Today, visitors to the Hunter House can enjoy exhibits that showcase 18th century achievements in arts and crafts.  These exhibits include furniture by the Townsend-Goddard family, who were popular cabinetmakers during the colonial era. The house exhibits examples of the finest achievements in the arts and crafts of 18th century Newport. The house showcases Newport pewter and paintings by Gilbert Stuart, Cosmo Alexander and Samuel King. This house is also known for its woodwork, including a carved pineapple over the doorway, a sign of welcome.

The Hunter House became a National Historic Landmark on November 24th, 1968, and is open seasonally, June through October, for tours through the Preservation Society of Newport County.

Some of the biggest attractions in Newport are the Newport Mansion, which wouldn’t be available to the public without the efforts of the Preservation Society of Newport.  The Preservation Society was founded by a group of visionaries in 1945.  Their goal was to save Newport’s historical architecture from neglect and ruin.  It is a non-profit organization, which now has 11 properties, 7 of which are National Historic Landmarks.  They have worked to “protect, preserve and present” these houses as museums to share the history of Newport with further generations.  The Preservation Society of Newport is the largest cultural organization in Rhode Island, and is continuously working to engage the public in America’s heritage. 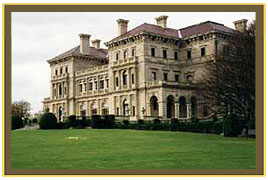 These historical building date back as far as the 1700’s and tell the story of America from the Colonial Era through the Gilded Age. More than 900,000 people visit these 11 properties every year, learning about what New England life was like within the last 250 years.  From the Hunter House to the Breakers, guests can explore history and see what life was like.  Both audio tours and guided tours are available.

The Preservation Society is always working to improve the historic experience and get their guests involved.  This past summer, the audio tour of the Elms was updated, which includes recent research and tells the story of the Venetian paintings in the dining room.  It also adds more information about servant life in the Gilded Age, incase you can’t experience the separate servants life tour.

In October 2013, the Preservation Society was approved by the RI Historical Preservation and Heritage Commission, to create a visitors center at the Breakers, Newport’s largest mansion.  This new center will get rid of the current ticket booth, portable restroom trailer, vending machine shed and seasonal ticket tent and create a one-story building that adopts the style of the original landscape.  It will offer visitors information about the Breakers as well as the other Preservation Society properties.  It will also offer refreshments and comfortable bathrooms.  No irreversible alteration to the landscape will happen and the historic “fabric” and “viewsheds” will be preserved.  They are just waiting on the appeal to the Newport Zoning Board.