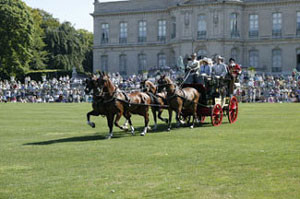 The Preservation Society will be hosting, once again, a Weekend of Coaching August 20th-23rd.  Approximately 12 coaching teams will be driving through the streets of Newport, bringing the sporting tradition to life.  These authentic 19th century coaches and their whips, or drivers, will be traveling around Ocean Drive and around the Bellevue area everyday of the event.  On Saturday, the 22nd, the Elms will be hosting a free driving exhibition at 10:30am. 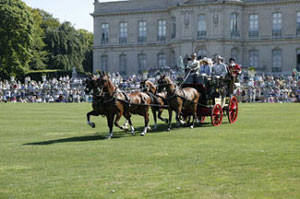 Photo from the Preservation Society

The English tradition of coaching started in England as a way to deliver mail, which later made it’s way to the United States.  While coach mail delivery was replaced with railroad delivery, coaching transformed into a sport.  In the late 19th century, the Coaching Club of New York was formed and became an important part of Newport’s summer social scene.  Coaches were used to go to places like polo matches and the Casino.  Some notable Newport members included the Wetmores, Bells, Belmonts and the Vanderbilts.  Alfred Vanderbilt was a leader in the sport and his coach,  and had his coach, Venture, built by the Brewster Company of New York. He took this coach and a large crew to England every year to for a day-long ride from Brighton to London.   Venture is now on display at the Breaker’s Carriage House.

Posted in: Newport Art and Culture, Outdoor Activities in Newport